The Vatican district - what to expect staying in the area

The Vatican City is of course one of the “must see” sights for the first time visitor to Rome. If you see hotel accommodation that says it is within walking distance of the Vatican Museums or St Peter's, for most people that's a positive signal.

But is staying close to the Vatican a good idea for the general visitor who will want to see the rest of what Rome has to offer? Well, don't rule it out.

There is certainly a good variety of accommodation around Vatican City for all budgets. The district has the feel of what it is for the most part, a middle class district. Nice, relatively clean but for the most part has no X factor to make it special once you are away from the Vatican itself. The streets are arranged in blocks, all of which look very similar.

What to expect from staying in the Vatican area Rome 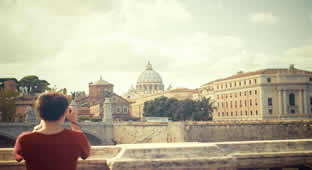 Line A of the Rome Metro cuts right through the middle of the Prati district with 3 stations, providing a fast if very crowded journey to the Colosseum, with a change of train at Termini Station.

Termini Station is Rome's major transport hub, as well as being the main railway station for services throughout Italy nearly all the airport buses and trains terminate here too. If you are using public transport from the airport or train station to the Vatican City, then a hotel in Prati district is going to be relatively tedious, especially if you have a significant amount of luggage.

However, all is not lost. SIT currently have an airport bus service from Fiumicino to Termini Station that makes a stop in the Prati district. On the other side of The Vatican from most of the hotels is also a train station, S.Pietro. From here there are frequent trains to Civitavecchia, Rome's cruise port and by changing trains at Trastevere you can make Fiumicino Airport without touching Termini. 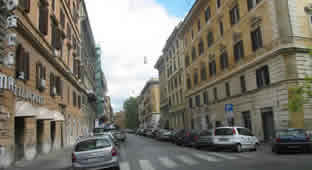 If you are looking to find accommodation close to the Vatican Museums and St Peter's you will be staying in the Prati District of Rome. This district flanks the north side of the River Tiber, with the ancient heart of Rome on the other south side.

Prati is a middle-class suburb built on a grid pattern. The picture right is typical of what you will see for block after block. Nothing very high rise or modern.

The main avenues like that pictured have small shops on the ground floor and the area is a major shopping district. Do not expect modern malls and large department stores or familiar international brand chains.

Trionfale flower-and-food market is a worthy sight in this district and the district has one of the few working old tram routes left in Rome. A delightful way to journey to Villa Borghese to the east.

Of course for the vast majority of visitors with only two or three days it is the blockbuster sights like the adjacent Vatican that is the magnet.

Going east-west through the heart of the Prati district is Line A of the Rome Metro and with 3 stations in the district you are only going to be at most 10 minutes' walk from one of them. The Metro will take you to the Spanish Steps and the Colosseum, both of which have Metro stations.

Walking south from your hotel, within 10-minutes you will reach the River Tiber. By crossing one of the many bridges you will enter the ancient city of Rome. It's a maze of narrow streets with a new discovery around almost every corner. Places like the Pantheon are only a 10-minute walk away, a great evening walk before you look for a restaurant perhaps around Piazza Navona or the endless possibilities from here towards Trastevere.

Around Prati there is a wide range of restaurants for all budgets, though of course pasta and pizza are everywhere.

Hotels around the Vatican/ Prati 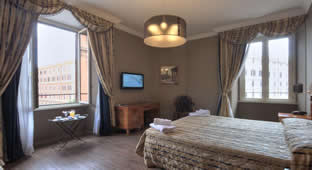 There are numerous small affordable pensions in the area offering relatively cheap and good quality accommodation, these we discuss in a separate dedicated page for budget hotels near to the Vatican.

Although the area has a lot of these small pensions, it has also got as many standard 3- and 4-star hotels too. There are very few chain hotels with familiar names in the district. Perhaps the notable exceptions are the two NH hotels and a Best Western, the Best Western Plus Hotel Spring House.

There is a Crowne Plaza hotel called the Crown Plaza St Peter's which despite its name is about 3km (2 miles) from the Vatican itself. There are a few hotels to the west of the city that have St Peter's in their name or allude to being convenient for Vatican City. Be careful in this respect its easy to find yourself some way from the Vatican itself.

However, just going this short way away from the city does reward you with very good value rates. The grounds of the Crowne Plaza for example is much more spacious than anything you will get in the city and has room for facilities like an outdoor swimming pool.

For Rome, the Prati district is kind of middle of the road. The hotels around Termini Station are normally cheaper, but Prati will in turn be cheaper than hotels around the Villa Borghese, Via Veneto district.

There really is only one way of exploring the ancient city centre of Rome and that's to walk.

Not only is walking the most practical way of visiting all the sights in the ancient city centre its also by far the most rewarding way.

For those who want to explore at their own pace then we have a few free reference walks that connect some of the most famous sights visitors want to see on their visit to Rome. Evening is a great time to blend the sights with a meal and a romantic walk afterwards.

Sights and what to do around the Vatican 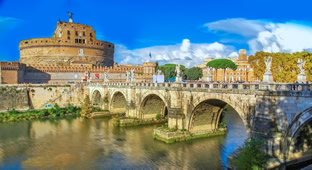 The Vatican Museums and St Peter's are obviously the blockbuster attractions in the district. Most visitors only stay in Rome 2 or 3 days and so are relatively time poor and never get beyond that.

For those with more time there is more to the Vatican than just the Vatican Museums and St Peter's Basilica, from formal tour attractions like the prison and gardens to popping into the Vatican post office and mailing a letter back home from Vatican state.

The Castel Sant'Angelo by the river on the main approach to St Peter's from the city of Rome is a major landmark and is probably the most interesting formal attraction for most visitors, but most visitors will walk right by it in their haste to get to St Peter's. Anywhere else and the fortress would probably be a major attraction.

The Castel Sant'Angelo is worthwhile. Once inside its like going back to a medieval age as you climb within the castle up atmospheric internal passageways which will stay in your memory. Although there are paintings and items on display, most people will remember the views from the top of the castle more, and there is a restaurant/bar too to relax and take it all in.

Although Prati is often quoted as a shopping district, for those coming from other big cities what is offered may seem underwhelming. For restaurants, there are some touristy back streets between St Peter's Square and Castel Sant'Angelo where there is a good choice of restaurants in largely pedestrianised streets.

There is nothing wrong with the restaurant/bar choice in Prati either, but most visitors will want to stroll over the other side of the River Tiber and explore the ancient city in the evening. For many one of the most memorable few hours in Rome, is to stroll the ancient city area find a nice restaurant or bar, people watch, take in some sights like the Trevi Fountain or Pantheon or just wander aimlessly making your own discoveries which seem to be around every corner. 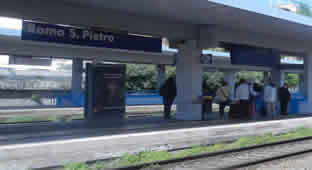 On the other side of The Vatican from most of the hotels is St Pietro Station. The trains that stop here are regional commuter style trains running two or three times an hour between Termini Station and Civitavecchia, Rome's cruise port.

The Vatican / Prati area is thus quite a convenient place to stay if you're staying in Rome prior or after a cruise.

Another use of this train is a cheap way to get to and from Fiumicino Airport, Rome's main airport. By changing train at Trastevere you can make Fiumicino without going to Termini Station and more cheaply than using the dedicated airport train the Leonardo Express.

Getting around Rome from the Vatican

As mentioned before going east-west through the heart of the Prati district is Line A of the Rome Metro and with 3 stations in the district you are only going to be at most 10 minutes' walk from one of them. The Metro will take you to the Spanish Steps and the Colosseum, both of which have Metro stations.

Local buses radiate out in all directions from the Prati area. There are a number of routes from the Vatican that shuttle through the heart of Rome to Termini Station on the other side of the city centre. See our Rome bus page for more details.

From just north of St Peter's Square the number 19 tram clunks its way in a circuitous route through everyday Rome before going through the Villa Borghese. Get off at the unmissable modern art museum in Villa Borghese for the short walk to Villa Borghese Gallery

All the cities Hop on Hop Off tourist buses of course pickup from just outside St Peter's Square.

Transfers between the Vatican/Prati district and Rome's airports & cruise port

Termini is the main hub for public transport in the centre of Rome and is linked directly to the Prati area by the Rome Metro.

From Termini the Leonardo Express train runs direct to the main Rome airport, Fiumicino. You can do this airport journey cheaper by getting a train from St Pietro Station on the other side of the Vatican from Prati to Trastevere, then changing trains to frequent suburban airport trains that go to Fiumicino much more cheaply than the Leonardo Express.

SIT run an airport bus service between Fiumicino Airport (Rome's main airport) and Termini Station that stops at Piazza Cavour just to the east of the Vatican, close to many of the hotels in Prati district.

To Ciampino Airport, Terravision run frequent airport coaches from Termini Station. From the Prati Metro stations you can go to end of Line A to Anagnina where a connecting local bus goes to Ciampino Airport. See our Ciampino bus page for further details.

Trains between Termini and Civitavecchia cruise port run twice hourly for much of the day from Termini. Conveniently these train stop at St Pietro Station on the other side of the Vatican from Prati.