The Leonardo Express Airport train is a dedicated airport train taking 30 minutes to reach the centre of Rome (Termini Station) with a frequency of every 15 minutes.

The only reason not to use the service is cost, it is around double the cost of competing bus and local train options.

The Leonardo Express is simply the best (fastest and most comfortable) public transport transfer between Fiumicino Airport and Central Rome (Termini Station).

The cheapest public transport option between the airport and city centre of Rome is the Terravision Bus, one of four competing airport bus services that also terminate at Termini Station. This is about a third of the cost of the Leonardo Express but takes at least twice as long and is not as frequent.

- Fastest public transport between Fiumicino Airport and the centre of Rome

- Most frequent public transport between Fiumicino and the centre of Rome

- Frequency, capacity and ticketing facilities means no prior booking required

- Journey time of 32 minutes with trains every 30 minutes

If you order Leonardo Express tickets on-line in advance you have to select a specific train departure time.

If you board a Leonardo Express train departing before that time a punitive fine may be imposed by the guard. However, boarding a train after the time on your ticket is no problem.

At Fiumicino Airport, the station is part of the passenger terminal complex. Although it can be a fair walk out to the station area it is undercover with moving walkways.

At Rome Airport the train station is well signposted within the passenger terminals. It's a 5-10-minute walk, but you've probably already walked a similar distance from your aircraft to baggage retrieval and customs.

The way is totally undercover using moving walkways and escalators/lifts.

Once at the Fiumicino Station there are ticket machines, the official ticket desk and three or four other independent outlets that all sell tickets for the Leonardo Express train.

Note: The station has three platforms and other local trains also terminate here. So do check which platform the next Leonardo Express train departs from, even if there is only one train in the station.

At Termini Station in Rome all trains arrive and depart from platforms 23 or 24 in the main area of the station - close to the left luggage office at the station.

Termini Station as well as being the main railway station for Rome also houses the main local bus station and is the hub where the Metro system radiates out from. It is also the biggest district of hotel accommodation for all budgets. It's a very convenient place to stay.

The station is like a small city with a large shopping centre, countless restaurants and facilities like left luggage.

Leonardo Express departs from platforms 23 and 24 of Rome Termini Station.

Trains between Rome City Centre and its airports + cruise ports 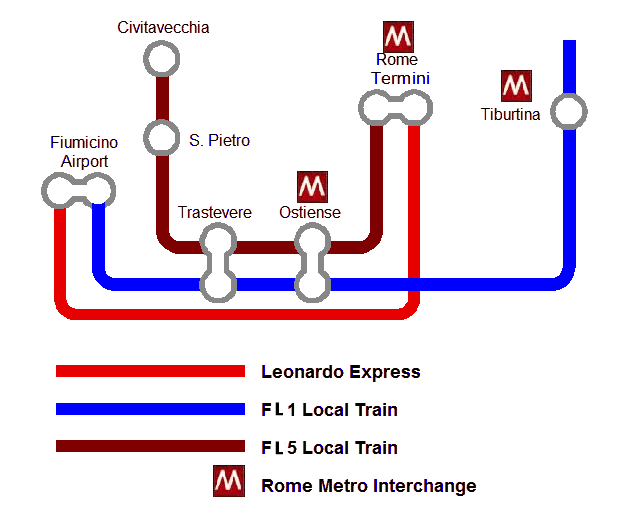 The city of Rome has a basic regional commuter train network of 8 lines, called the FL1 service.

It terminates at Rome's main airport Fiumicino, provides a stopping service circling around the city. Fiumicino Airport is west of Rome, the FL1 circles around the south of Rome then up through the eastern suburbs.

Along the way it interchanges with all the other FL services, the Rome Metro and countless local bus and tram routes. However it doesn't go into the centre of Rome and the main train station Termini Station, but you can connect to another FL1 train which does.

The Leonardo Express is simply the fastest and most comfortable public transport transfer between Fiumicino Airport and Central Rome (Termini Station) for which you pay a significant price premium.

The FL1 is just one of the alternatives available to people who prefer to save money for a slower, more tedious airport transfer. The cheapest transfer option between airport and city centre is the Terravision Airport Bus.

One way fare on FL1 (to Trastevere, Ostiense, Tiburtina): €8 Adult

There are very cheap bus services to both of Rome's airports, Fiumicino and Ciampino. The market leader is currently Terravision to both airports.

The Rome terminus for all the airport bus services from both airports is Termini Station, the same railway station that the dedicated airport train from Fiumicino Airport arrives.

Unfortunately you cannot use Rome public transport tickets to either of the Rome airports by bus or train.

The area around Termini also has the largest choice of hotel accommodation in Rome from hostels right up to luxury hotels.