Rome public buses run a comprehensive and frequent system running from about 5.30am to midnight daily. These bus services are supplemented by night services that run all night along the core routes.

In general the public buses are used for short journeys and as a feeder service to the Metro and train networks. However, in the ancient centre of Rome, where neither the Metro or any railway line ventures, the bus is the only viable public transport.

Bus maps and finding your way

There are a bewildering array of routes. Use the image link to see the official bus map of central Rome.

In the centre of Rome the narrow streets mean all buses are channelled down a few major roads. You will often find you have a wide choice of routes going where you need as a result and have no need for a bus map.

Even so, the buses are constrained in this central area, far too big to travel along many of the roads. Buses trundle along just a few of the major road arteries so make sure you have comfortable walking shoes.

Helpfully nearly all bus stops are large with the routes stopping at the bus stop clearly displayed. Each route is detailed with the major stops along the way stated.

Don't expect orderly queues where those waiting longest get on the bus first. More than likely the bus will be crowded and there will be an undignified scramble onto the bus often with pushing past those trying to get off the bus. Also do not expect to get a seat either. If you do get one, treat it as an unexpected bonus. Clearly your chances of getting a seat are much better if you get on at the starting point of the bus.

Of the main 'must-see' sights the Vatican, Spanish Steps and Colosseum/Forum are best visited by Metro if you can.

The ancient centre of Rome is a no-go area for the Metro. You need to walk (and walking is an attractive proposition in Rome) or take the local bus. Even these buses cannot penetrate the narrow lanes of the ancient city centre - but there is a network of small electric buses that can (see below).

Some key, frequent routes for the tourist are listed below, but there are many, many more.

Tickets for both the bus system and Metro can be purchased from tobacconists, bars, or vending machines at Metro stations and major bus stops. On both buses and metro there is a flat fare, whether you go one stop or to the end of the line. On buses your ticket is valid for 100 minutes allowing you to change buses using a single ticket.

At Metro stations there are ticket barriers where you have to insert your ticket to enter and leave the Metro station.

On buses and trams you will find ticket validation machines similar to that pictured. If you have a single ticket then enter the ticket into the machine. If you have purchased a pass, you put the pass into the machine on your first journey. This stamps the date and time from which the pass or ticket is valid.

Groups of ticket inspectors from time to time descend on to a bus or platform to check all passengers have valid tickets. If not you will incur a heavy fine. Playing the innocent tourist doesn't work.

For more in-depth coverage of ticketing and tips on procuring your tickets we have a dedicated page linked below.


Public transportation is free for children under 10 years old, with accompanying adult.

Much of the ancient city centre of Rome is just a maze of narrow lanes impenetrable for standard buses, and many of these areas are prime tourist stomping grounds like the Pantheon, Trevi Fountain and Campo De Fiori districts.

The small electric buses have been missing in Rome since October 2017 but in Spring 2019 they were scheduled to make their comeback, with a phased reintroduction culminating in 25 buses in operation by that Summer and 60 by 2020. These are cosy small buses with room for only a handful of people and previously either seemed to be empty or jam packed. With the environmental pressure growing, we hope to see these being used more regularly this time round. They are pretty frequent and normal bus ticketing applies.

It seems a shame to take the bus though as these lanes are made for walking and making your own discoveries. However one useful route climbs the hill to Villa Borghese and terminates at the Borghese Gallery not visited by other public transport

There is a small network of trams in Rome, most of which do not cover the main districts frequented by visitors. If you have time and want to see a little of the “real Rome” you can combine the number 3 and 19 trams to a pleasant window on suburban Rome.

The number 19 tram starts in a square outside the walls of the Vatican, on the main walking route between St Peter's Square and the Vatican Museum. The 19 tram eventually takes you to the Villa Borghese Park where the number 3 tram joins the route for around 15/20 minutes from outside the Modern Art Museum.

Changing to the number 3 tram you circuit the eastern side of Rome and swing around to the south of the city centre with good views of the original Rome walls, before passing the Colosseum and crossing over the river to Trastevere.

Trastevere is a major restaurant district and the number 8 tram connects you the short journey to the Piazza Venezia right in the hear of Rome by the Roman Forum and the Capitoline Museum.

There are cheap bus services to both of Rome's airports, Fiumicino and Ciampino. The market leader is currently Terravision to both airports but there are now several competing bus lines, where only a few years ago there were none.

The Rome terminus for all the airport bus services from both airports is Termini Station, the same railway station that the dedicated airport train from Fiumicino Airport arrives.

Unfortunately you cannot use Rome public transport tickets to either of the Rome airports by bus or train, but the airport bus fares are cheap.

In Rome the various airport buses have their stops scattered all around Termini Station. Termini Station is the main transport hub in the centre of Rome, the main local bus station is in front of the railway station and it is the hub of the Rome's Metro system.

Of all of the four competing airport bus services Terravision is the only operator that has a formal ticket office and waiting room at Termini Station. This is inside the Terracafe, Terravision's own cafe and bar.

The area around Termini Station also has the largest choice of hotel accommodation in Rome from hostels right up to luxury hotels. For most independently minded visitors with one eye on the wallet it's probably going to be the benchmark hotel district in which to seek accommodation.

The only reason not to use the service is cost, it is around double the cost of alternative public transport options.

There is no direct train service to Ciampino Airport.

Save time and money with the Vatican and Rome card!

It's a straight forward proposition, combine the Roma Cristiana hop on, hop off city sightseeing bus with a 1 or 3 day public transport pass.

The public transport covering all of Rome's metro, tram, suburban train and bus system. Roma Cristiana is one of Rome's leading Hop On, Hop Off sightseeing buses that visits all the major sights in the city of Rome.

Both are combined in one convenient and money saving pass that covers all your transport requirements when visiting Rome. 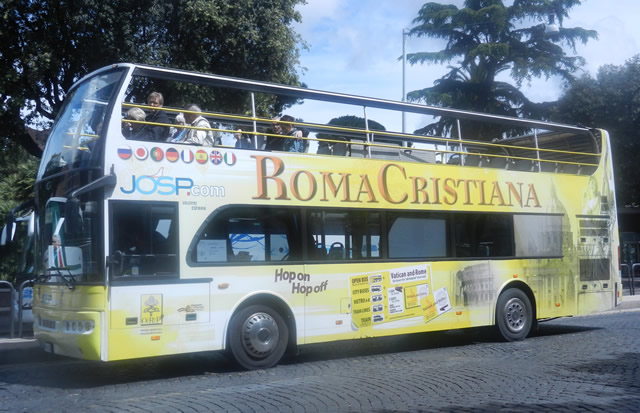