Hotels near the Colosseum are by necessity to the north, north west and east of the Colosseum. The large tract of land taken up by the Palatine Hill and Roman Forum itself take up most of the land to the west and south.

Just to the north of the Colosseum is the ancient traditional Rione Monti district stretching from the Colosseum over towards Cavour Metro.

A favourite with locals, hard to believe you are in the heart of the capital city of Rome - almost a village atmosphere.

A great alternative to the heaving tourists over in Trastevere seeking the same 'authentic' Italian experience. This area is very atmospheric to walk, the narrow streets stopping larger levels of traffic.

See our selection of Colosseum hotels in Rome

About the Colosseum hotel area

Immediately to the east of the Colosseum is a small lively district of bars, restaurants and some hotels. Hotels here are relatively sparse and have a definite price premium.

As you head north east towards Manzoni Metro there are a few good value 4-star hotels around Manzoni, only about ten-fifteen minutes' walk from the Colosseum and Roman Forum.

These offer very good value for the class of hotel, and the convenient Metro will get you to the other main sights on the other side of the city like the Vatican and Spanish Steps in a very short time.

In relation to the rest of the major sights in Rome, the big plus is the Metro line that runs through the district with stations at Cavour and the Colosseum itself. The Metro will take you quickly to the Spanish Steps and near the Vatican.

It's only ten minutes' walk along the side of the Roman Forum from the Colosseum into the ancient city of Rome.

As a major attraction, all of Rome's hop on, hop off sightseeing buses stop at the Colosseum too.

For airport transfers, Termini Station is about a mile away where you have a choice of train or bus lines to the airports and is Rome's central station if you are travelling within Italy by train.

Our selection of hotels near the Colosseum, Rome: 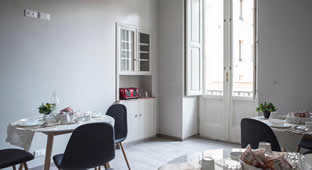 Located a 5-min walk from the Colosseum and Metro, featuring free Wi-Fi throughout and bike rental. Housed in a historical building, guest rooms come with elegant decor, TV and electric kettle. The private bathroom is either en suite or outside the room. Breakfast is a buffet including croissants, homemade cakes, cold cuts and cheese. 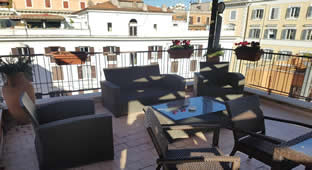 Situated on a cobbled side street just across the road from the Roman Forum and the Coliseum. Air-conditioned rooms feature a flat-screen TV, a minibar & free Wi-Fi. A sweet breakfast is included; gluten-free food on request. In the evening you can enjoy a glass of wine on the charming roof terrace overlooking Roman rooftops and ancient monuments. 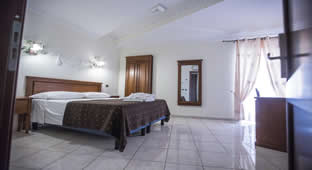 A classic Italian breakfast with coffee, cappuccino and croissant is served in your room. Air conditioned rooms feature free Wi-Fi and come with a TV and antique wooden furniture. Rooms are located on the third floor - without a lift. 10-min walk to Colosseum and Termini Train Station, the lively Monti area is full of bars and restaurants.

Featuring a terrace with magnificent city views, this hotel is near the Colosseum and the Santa Maria Maggiore Basilica. Offers en suite rooms and self-catering apartments. A breakfast buffet with fresh croissants and a mix of sweet and savoury items is part of the room rate.

Located in Rome's Monti district, in the heart of the city's historic centre, Il Covo is 5-mins away from the Colosseum. It also has great transport links and it is one stop away from Termini Station. The B&B features spacious and very comfortable rooms. Breakfast is included in the room rate. 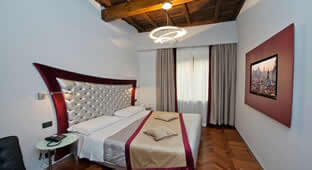 In Rome's Monti district, a 5-min walk from the Colosseum and very close to Cavour Metro. Rooms are soundproofed and feature parquet floors, large TV and free Wi-Fi. Some rooms feature exposed wood beams on the ceilings, and some have a spa bath. A continental breakfast can be brought to your room each morning.

Located in a 19th century building in the heart of Rome’s popular Monti district just a few steps from the Colosseum and the Roman Forum. Elegant rooms with air conditioning, a TV and safe. Wi-fi is free throughout. Continental breakfast included in room rate. The surrounding area is full of traditional Roman and ethnic restaurants, and intimate wine bars. 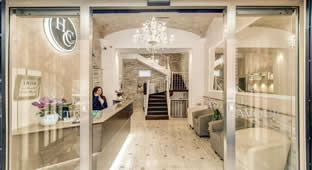 Enjoying an exclusive location overlooking the Roman Forum, just around the corner from the Colosseum. Housed in an elegant old building with a welcoming atmosphere and helpful staff, inside this peaceful property you will be treated to top-quality service and facilities. Breakfast included in room rate. Free wi-fi. 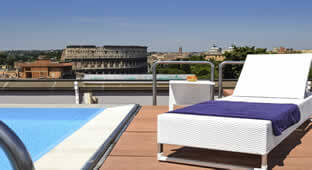 Offers a prime location in the heart of one of Rome’s historic and yet liveliest neighbourhoods, in the immediate surroundings of the Colosseum. Roof terrace with swimming pool (open from May to September). Air conditioned rooms with safety deposit box, free Wi-Fi and satellite TV. Contemporary lounge area where you can relax with a drink or enjoy a dish from the menu.. 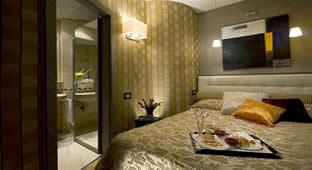 Housed in a 19th-century town house in the Monti district. A 5-min walk from the Roman Forum and the Colosseum. Air conditioned rooms feature marble bathrooms and satellite TV. Buffet breakfast is included in room rate. The hotel is surrounded by ethnic shops, restaurants and bars. Free Wi-Fi.


Top of the page

Other hotel options in Rome