NH affords you a selection of 4- and 5-star hotels in Rome, located in some convenient areas of Italy's capital; in the Historic Quarter, the main transport hub at Termini Station and in the vicinity of the Vatican and smart Via Veneto areas.

The NH story has a 40-year history and is a benchmark operator of city hotels in Europe and Latin America. It operates more than 350 hotels across its portfolio. It pledges an environmental committment and sustainability-driven concept to its hotels.

NH hotels positions itself as one of Europe's most important chain hotels with around 60,000 rooms available.

NH hotels is a brand that also offers 3- and 4-star hotels in good urban locations of major cities, offering the combination of quality and value.

NH hotels in Rome   What to expect

What to expect from NH hotels in Rome?

As with most of the large chains, you'll find one or more hotels outside the city centre. The Villa Carpegna is west of the Vatican, a few kiolmetres from the city centre. On the plus side you get lower prices, more space and in the summer heat, especially welcome, an open air swimming pool. The Midas Hotel is also outside the centre, 20-mins from Fiumicino Airport and 5-mins from the Vatican City. This hotel also benefits from a large outdoor pool for use in the summer.

The other NH hotels are in the city centre. Two in the Prati district just to the east of Vatican City on the other side of the river from the ancient city of Rome. Walkable to many of the main attractions.

The Giustiniano is about ten minutes' walk from the Vatican.

The Palazzo Cinquecento is a flagship 5-star hotel literally steps from Termini Station, the main transport hub of Rome where perhaps the majority of visitors to Rome will enter Rome either by airport bus or train services from throughout Italy.

The Vittorio Veneto hotel is around the exclusive shopping and nightlife of the Via Veneto, overlooking the Villa Borghese parkland. The top of the Via Veneto is where you find many of the most expensive hotels in Rome for which you pay a sizable premium.

It is a great location though, surrounded by one of the most elegant parts of Rome with the large Villa Borghese park on one side and the ancient city on the other side, the Spanish Steps is just five minutes' walk.

Our selection of NH hotels in Rome: 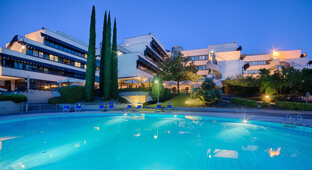 Housed in a modern building with private garden, offering a gym, an outdoor swimming pool, free parking and free Wi-Fi. The restaurant serves national and international dishes, and snacks and cocktails are available at the bar. Breakfast is an American buffet. The hotel is in a quiet area, 1.2 miles from the Vatican. Rooms are equipped with air conditioning, satellite TV, and marble bathroom. 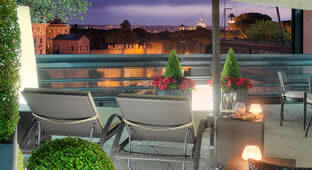 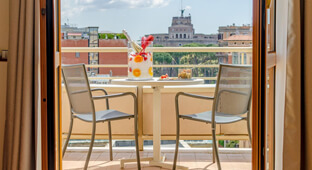 Set in the pleasant neighbourhood of Prati, surrounded by shopping opportunities and only a ten minute walk from Vatican City, Lepanto Metro Station is 700m away. Generous buffet breakfast included in room rate. Air-conditioned rooms have a satellite TV. Some rooms overlook St. Peter's Basilica and Castel Sant'Angelo. Free Wi-Fi and gym. 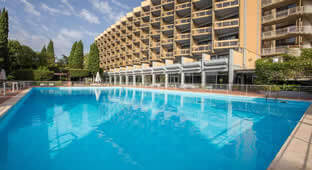 Outside the centre, a large, functional NH Midas is 20-mins from Fiumicino Airport and 5-mins from the Vatican City. Large outdoor swimming pool, open from June to September. Rooms with free Wi-Fi, satellite TV and a work desk. Free parking. 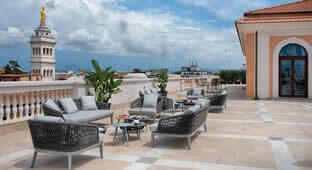 Offering luxurious accommodation a few steps from Termini Metro and Train Station. A free fitness centre and a rooftop terrace are featured. Each room and suite come with air conditioning, a mini bar and free Wi-Fi. Some have a terrace and views of the surrounding extensive gardens with Roman ruins. Suites feature a seating area. 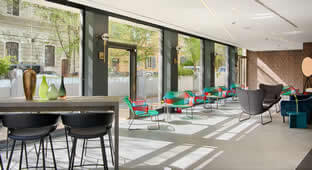 Set in the Prati area, between the Vatican and Castel Sant Angelo. Offering free Wi-Fi throughout, an extensive buffet breakfast, and a fitness area overlooking the city. Both Lepanto and Ottaviano Metro Station, on line A are a short walk. Rooms are equipped with soft carpeted floors, air conditioning, and a satellite TV. Bar/restaurant and terrace.

Other accommodation alternatives in Rome

Other chain hotel alternatives in Rome