On paper the licensed taxi services from the airport terminal taxi rank are an attractive option. Expect to pay €30 - €40 for up to four passengers between Ciampino Airport and destinations in Rome city centre.

This includes baggage and is for a maximum of four passengers. The standard fare is valid for either direction. If your destination is outside the city walls then the journey is metered.

Vehicles are a mixed bag but tend to be much smaller than the Mercedes saloons so common in other cities. Many are small - see the image right taken at the taxi rank at Ciampino - more a solution for a single business traveller with briefcase than leisure travellers with luggage. If you have more than 3 large cases, luggage may be a problem.

About private taxis to and from Ciampino Airport

The cars for the taxi service of the City of Rome are white and can be recognized by the sign "Taxi" on the top and by the identifying licence number on the doors, on the back and inside the car.

Unfortunately the taxi cabs in Rome have a poor reputation for ripping off unsuspecting tourists, especially at the airports and Termini Station. A lot of the time the culprits are not licensed taxi cabs at all but people masquerading as such.

Unlike the standard fare for going into Rome city centre where bags are part of the fare, for metered rides you will be charged a supplement for each item of luggage.

Above all reject anybody who approaches you offering a taxi or private car transport in the terminal area. Either get a Rome city cab from the taxi rank or pre-book a private car in advance - anybody else is operating illegally, probably in an unlicensed cab.

If you notice any cab hanging back or leading you to a cab not next in the queue, be suspicious.

The alternative to the licensed city cabs are private transfers booked in advance.

With your own vehicle and experienced driver pre-arranged there is less stress.

You have agreed the fixed price in advance, so no worries with unexpected extras being added. 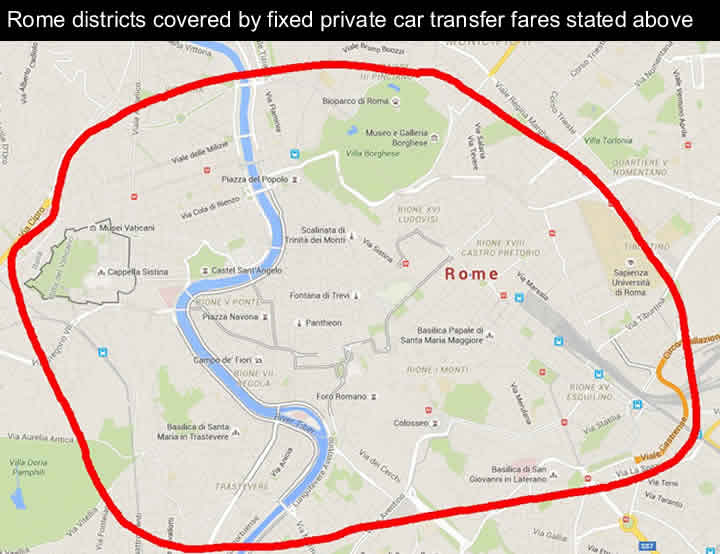 An efficient way of seeing Rome within the limited time you have is to fit in a short tour of Rome on your journey from the airport. An ideal way to quickly get orientated with Rome and perhaps revise your priorities for what you want to visit later in more detail and more time.

This is also an ideal way for those staying at an airport hotel overnight not to miss the sights of Rome. The tour can start and finish at your airport hotel.

The transfer/tour visits all the main sights of Rome in a few hours, or you can specify exactly what and for how long you wish to visit specified attractions in your own itinerary.

Use the form below to check prices and book now:

For a confirmed personalised quotation that may address any aspects you are concerned about and wish to raise please use the enquiry form below.

We will normally respond with a firm quotation well within one day.